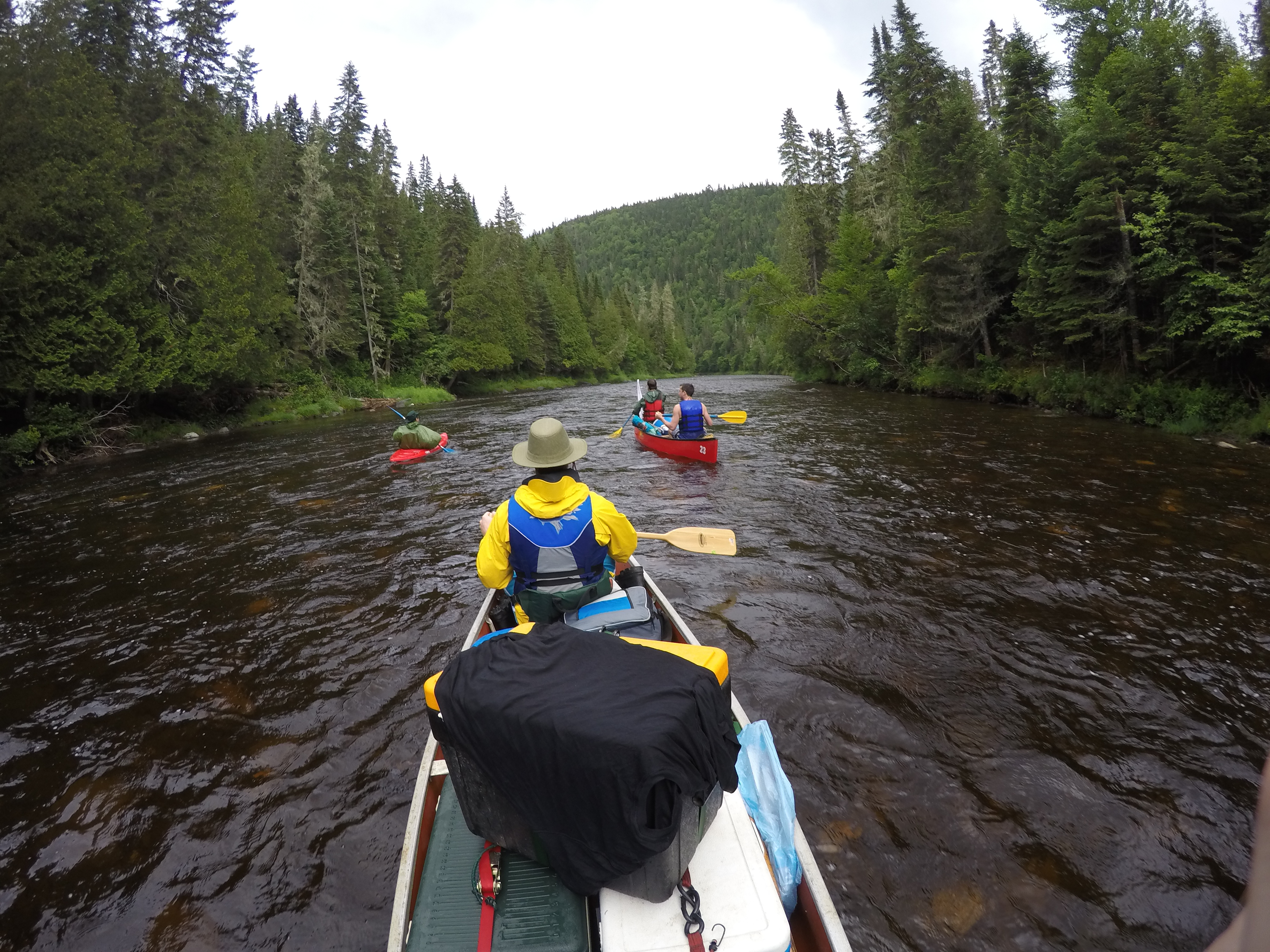 FREELANCE JOURNALISM: I had a story appear in the September 5th issue of the Telegraph Journal in its Escapade Section.

I spent three days canoeing on the world famous Kedgwick River in north western New Brunswick, Canada. It was the first time doing a multi-day river run for the majority of the group, and we all loved it.

Three days out on the Kedgwick River

For an hour we travelled a maze of bumbling dirt roads – through mountains and along the river, to arrive at a clearing with a few cabins. We unloaded our coolers and gear from the small school bus.

Then the driver left.

This is where we began our three-day canoe trip.

We arrived at“The Forks”– where the north and south branch of the Kedgwick River meet, deep in the woods of northwestern New Brunswick. Downstream, the river joins with the Restigouche, and flows to the Baie des Chaleurs and the Gulf of St. Lawrence. The world renown salmon of this river swim even further – to Newfoundland, the Atlantic Ocean, and the shores of Greenland. They then come home, all the way back to the dark pools where our canoes glide overhead.

Canoeing the Kedgwick feels like a trip back in time. The forest is old, the place is quiet, and you can still imagine four-foot fish swimming below.

The entire watershed is famous. People from around the world stay at the camps, take guided tours, and fish. One University of New Brunswick study estimates more than $11 million is generated by the angling and eco-tourism economy created by these rivers. Yet, many New Brunswickers have never even heard of the place.

Some who do know about the area assume it’s an exclusive experience, but it’s not. Even if you want to fish, it can be done for approximately $50 a day, cabin included, if you’re selected in a lottery for two-day access to crown reserve pools.

But for those who enjoy the outdoors, camping, and have a constant curiosity for what’s around the corner – there is no better vacation than a canoe run.

My five-person group did a three-day trip for only $100 each. That included one rental, the shuttle service, our food, and even our gas.

We drove from Bathurst, to Campbellton, to Kedgwick. As the peaks and valleys grew, it becomes obvious that New Brunswick does, in fact, contain a section of the Appalachian mountain range. We turned deeper into the woods, onto narrow, winding roads, trusting the directions shouted by our iPhones.

We finally pulled into Arpin Canoe Restigouche, with their racks of canoes around the property, and rows of cars parked on the grass.

Arpin is the largest rental company in the area. It provides guided tours ranging from two-and-a-half hours, to six days.

Marie-Christine Arpin has been the owner for the past two years. Her father started it more than 20 years ago, with one truck and six boats. The company can now provide as much help as you want. You can bring your own equipment, or use theirs. Go alone, or have a guide. They can even provide the food, and cook it too.

“The only thing you need to bring is your clothes, sleeping bag – the rest is provided,”Arpin said.“It makes it more simple to go canoeing and more accessible.“

“You don’t need prior experience to do those rivers,”Arpin said.

It doesn’t take long to learn to read the surface of the water. Make a mistake – or stare into the woods for too long – and you simply run aground.

But read it right, and you can pick up speed. While trying to harness the current, you get a feel for the elegance of these simple boats.

With a few tips pulled from an old Bill Mason book, you can easily move in 360 degrees.

At the front of my boat for the three days was Randall Wood – an engineer visiting home from Ontario.

“Rock on the right,” Wood said, as we came out of a turn.

Wood gave one strong paddle on the right side. This moved the nose off its collision course.

However, this turns our side to a rock – the one thing we know not to do. But Wood knows what I’m planning.

I lean out far to the left, turn the paddle toward the boat, and pull the water toward me. A draw.

I put a slight angle on the paddle and pull upstream, making a small arcshaped stroke. In a matter of moments, we move the boat entirely to the left, stay safely pointed down river, and slow ourselves down.

The rock passes. I drag my paddle, feel the pressure, and twist my wrist. This turns the nose, and we angle ourselves for the upcoming bend. We begin picking up momentum again.

A 17-foot boat, with more than 500 pounds of weight, can react and weave like this down the entire river. It can even be done without pulling the paddles from the water. It is extremely satisfying.

“It’s a bit of an art,” said Raphael Soucy, a guide.“An art and a science at the same time.”

Soucy teaches junior high school in Newfoundland, and has been a guide for Arpin for 16 of the past 20 years.

While many groups visit for the fishing, Soucy does get some that are interested more in canoeing.

“With just a few tips and demonstrations – people usually get it pretty quick,” he said.“It makes their trip that much more enjoyable.”

For Soucy, it’s the area that keeps bringing him back. He stays for two or three months at a time.

“The first day that I showed up … I sort of fell in love with the place,” he said.“It’s a gorgeous part of New Brunswick. It’s not a spot that a lot of people know about and have taken the time to see.”

And perhaps counterintuitively, it’s the activity and the people who take the time to visit, that allows these rivers to remain so natural.

“Having more people on the river brings support for our organization, also support for the conservation of the wilderness of the rivers,” said David LeBlanc, the executive director of the Restigouche River Watershed Management Council.

The council’s mandate is to conserve, protect, and restore the salmon stock in the approximately 10,000-square-kilometre area. It conducts surveys, assessments, and stocking programs. It even repairs public picnic tables, and outhouses.

After many years of bad news – including mandatory release of all salmon this year – the council has some encouraging data. The highest number of grilse – predominantly male salmon returning after one year in the Gulf of St. Lawrence – were recorded on the rivers since 2011. This could be an indication of a healthy smolt run leaving the rivers for the first time in 2014. If so, it is likely there will be a good number of larger female salmon returning to the rivers beginning in 2016. This is the key component to repopulating the rivers.

Core funding for the council, and its work, comes from the fishing camps.

“It’s kind of the only guaranteed money we have,”LeBlanc said.

The rivers of the watershed provide more than 500 jobs, and $600,000 a year to the provincial government in land leasing alone. And this all relies on having clean rivers that paddlers, anglers, and salmon can enjoy.

Everyone involved seems to understand the importance of keeping these places healthy.

Over the last 20-years, Soucy has guided a lot of groups. But he’s been noticing changes in attitudes lately. He said everyone he works with agrees that it’s been“night and day.”

“People take it a little bit more seriously,” he said. “They’ve shown a great improvement in their respect for the environment. Which is really great to see. Because as a population, to change a mindset … it’s something that doesn’t happen very quickly.”

It could be that people know they will be returning. Just like Soucy, being on these rivers even once has a tendency to get you hooked.

“A lot of people have been paddling (here) as long as the company’s been existing,” Soucy said. “They came when it first started, and they’ve been coming for 20- odd years. They’re bringing their kids, and their kids are growing up and getting married, and they’re bringing their own families. It’s sort of nice to see people coming back to the same spot. I think it speaks a lot of the area. It’s a phenomenal spot to see.”

We all agreed – we’re going for four days next time.

PDF’s from the Telegraph Journal 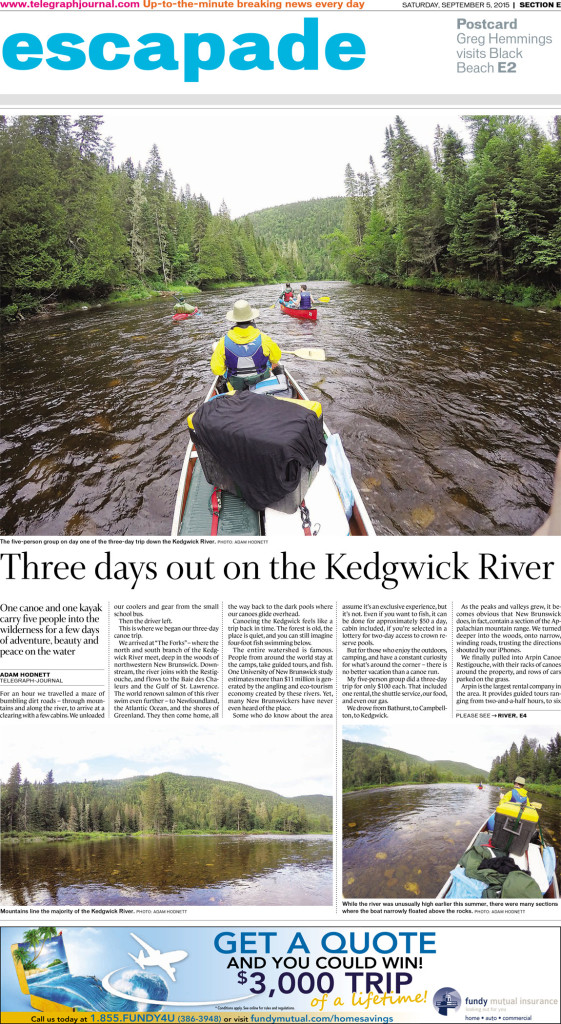 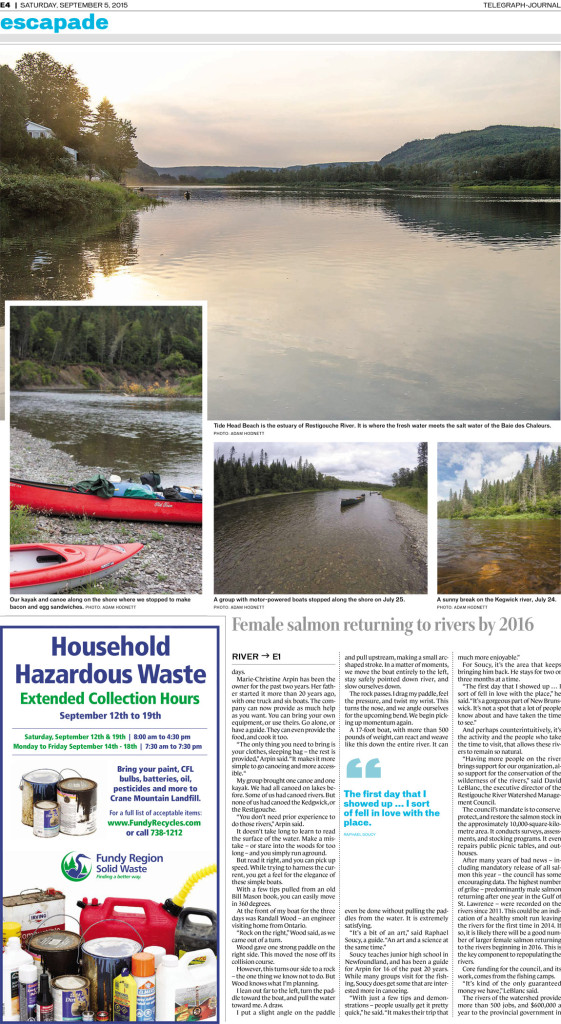 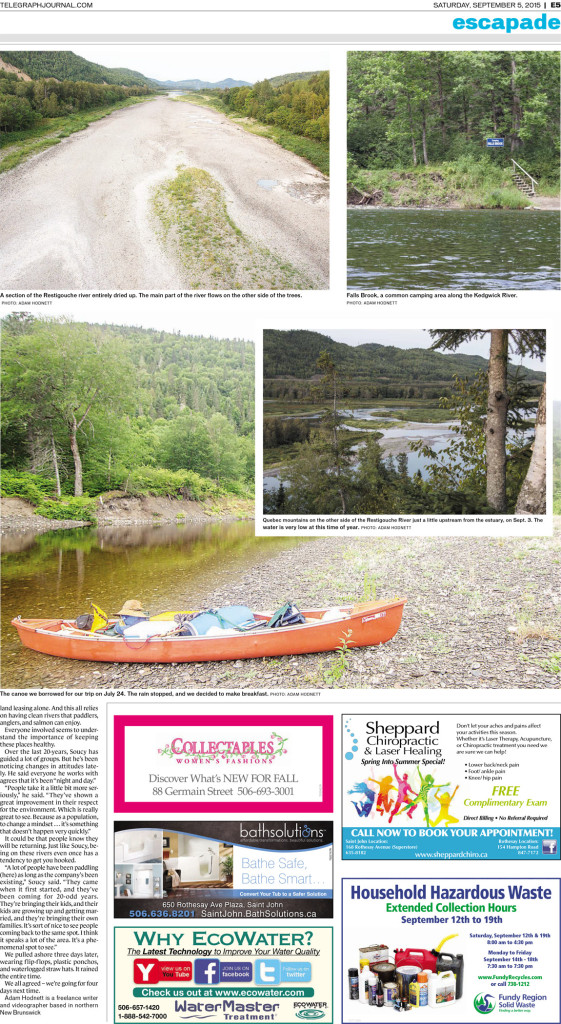