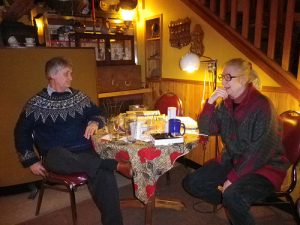 Originally posted here. Molly has always fascinated me, and I don’t eat there nearly as much as I would like. It’s unique, warm, and interesting. So I was delighted when she agreed to let me do a profile. It was an hour and a half interview.

The red metal doors at Molly’s are odd for a coffeehouse—I see them at auditoriums, or as the side-doors at hockey rinks.

Inside, the wooden frame of a veranda leads you from the door to the counter, and then to the dimly lit sitting area. Lamps and wooden tables cover the carpet. The room is eclectic, decorated with everything from small white doll masks, to a one-horse open sleigh.

“People sometimes don’t get passed the door,” Molly said. “They come in and they go—“ she opened her eyes wide and dropped her jaw—“and they look under the thing, and you see these little people looking at you going, ‘uh.’ And you feel like a fool, and they look like a fool. Half the time I don’t know what to say to them.”

The place is definitely different. It smells like homemade bread, and she doesn’t accept debit cards.

Molly is also known to speak her mind—maybe too freely sometimes.  Regardless, this month marks her 19th year in business. And it hasn’t always been easy.

“You’ve got to roll with the punches, and be prepared to give things up,” she said.

Molly’s a tall, strong-looking woman. She has a long white ponytail, and glasses that cover almost a third of her face. Her and her husband Daryl run the place themselves, seven days a week. I’m not sure how old they are.

“None of your business,” she told me. “And that’s on record.”

She does things her way, says what she thinks, and doesn’t tolerate disrespectful customers.

Molly has seen enough nasty consumers. She does an impersonation of an alpha-male who takes offense easily for a couple of her stories.

One guy gave her such a hard time that she called the cops. When they showed up, he went outside, stuck his head in their window, and continued complaining. She thought it was funny. But, this stuff use to bother her.

She’s been doing it long enough now to know what to expect.

“People are weird—oh we know they’re weird. They’re all individuals and they have different stressors, different methods of growing up, different attitudes,” she said.

She makes herself impersonal to protect herself. She doesn’t usually look at people when she takes orders, and she’s reserved around people she doesn’t know.

“You do have to kind of guard against people taking advantage of you—I guess that’s basically what I consider it.”

And she does it seven days a week.

It’s a step up in lifestyle.

“I actually get more time off now than when I was running the farm,” she said.

Before the coffeehouse, she had a farm and a table at the market.

“Christmas day you’re getting out of bed to feed the birds. You can’t let them go Christmas day—you’d be feeling a little guilty.”

She raised chickens and show-birds.

She would pay someone to kill the birds when they were ready. She can’t stand killing things. She never raised larger animals because of it.

And then one day she saw how they handled her birds.

“I decided I had to do it myself; I had to take the responsibility. That’s the way I feel about it anyway, I was just being a coward before that,” she said.

She could do it without stressing them out. They didn’t have to be transported anywhere. It was quick and painless. “If you’re going to eat meat—somebody has to do it … It’s better that I should do it.”

But by late 1994 it had become too much, so she gave up the market.

“And by 99’ I had to give up the farm, I just couldn’t do it.” She put on a frail southern accent, “I was getting older, it was more difficult.”

She devoted herself full-time to the café…

“Grr, no—not a coffee shop either!”

“Coffee house, right—house,” she told me. “Yeah, we actually gave up on trying to call it a coffee house because nobody gets it.”

Coffee houses serve alcohol, food, and coffee. They were popular again in the 60’s and 70’s.

“The coffee house license is the oldest one in Canada. The first one in North America was where that new convention centre is.”

But, she accepts her place being licensed as a restaurant. It seems reasonable—the food is her passion.

She’s picky about her ingredients.

“It’s just planning. I planned for a year before I put the organic stuff on the menu,” she said.

She makes it all from scratch.

“Well, there’s a few things that I cheat a little on, but they’re not on the menu. They’re specials, if I want to do something a little different, and quick, I might buy something that is not what I would consider really up to par for the menu.”

And she doesn’t serve anything she doesn’t like. People like her cream of mushroom soup, but she hates it.

“I can’t serve something I hate.”

The recipes are her own.

“When I go to do a recipe like nachos, I do a lot of research to find out what exactly is the intention of nachos,” she said.

“Nachos are a method of using up leftovers—that’s what they’re used for… when I discovered what it was that nachos were—and that was the key—then I could go ahead and make my own now, it’s that understanding of a food that allows you to imitate a food.”

“I was told by somebody that they had nachos like mine in some little town in Mexico.” In a southern accent she said, “maybe I got some vibes from down there.’

So, what’s in her lentil soup?

“Are you out of your cotton-picking tree?” she said. “After four batches having to be thrown out, I don’t think so. I couldn’t tell you how many people have been after that lentil soup recipe—I’ve lost count. People will come in four and five times, and order it and bring other people in.” She pretended to hunch over food and eat with both hands while looking around with shifting eyes. “It’s just hilarious. Go make your own—don’t be looking at mine. And they always get it wrong. That’s what really mesmerizes me.”

They started at a different location. They use to sell magazines and books. They’ve renovated, they’ve had a rooftop patio, and they’ve gone through a bunch of recipes. No matter what they do though—it’s always unmistakably Molly’s.

“Some people hate the place, and some people love it,” she said. “I guess I only want the people who love it to come back.”

Getting Into Farming
J-School Court
0 replies

Who Needs a Studio?

Getting Into Farming
Scroll to top